The market for stress urinary incontinence (SUI) solutions has undeniably seen a history of underinvestment and underdevelopment. Femtech is currently growing at unprecedented rates as the result of women’s healthcare being characterized as under-funded, under-researched and insufficient for several years1. A lack of innovation has partly been driven by a lack of confidence from women in expressing their concerns around their own health, especially when it comes to embarrassing and taboo issues like urinary incontinence. We often hear from many physicians that women do not even feel comfortable raising the issue of SUI with their doctors, let alone their friends. It is only in recent years, that we have seen an openness from women to talk about common health issues like menstruation, urinary incontinence, or post-partum issues. Lack of communication surrounding the issue has hidden it from mainstream focus, and likely contributed to the lack of innovation in the space. 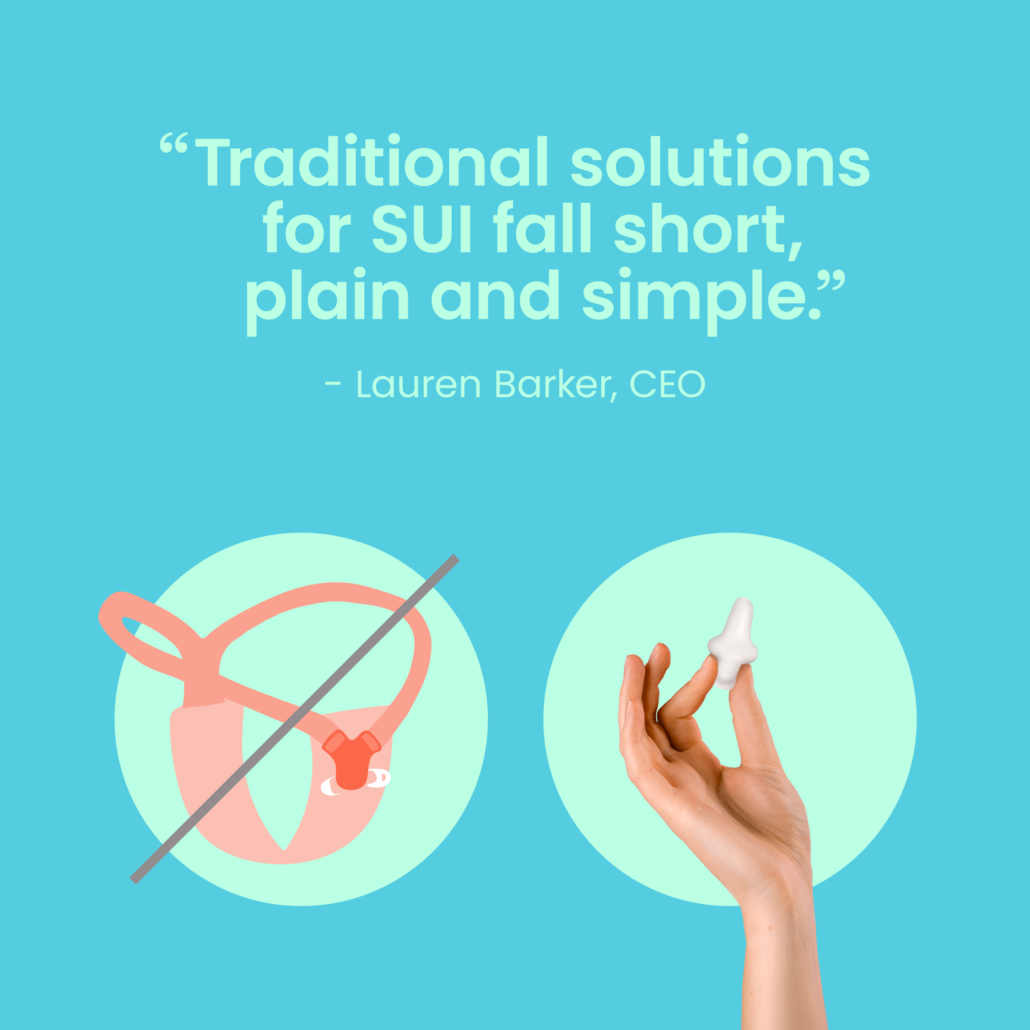 SUI was hardly a matter of discussion (or even relative concern) for physicians prior to the 20th century. In fact, many issues concerning women’s health were neglected or considered taboo for much of the course of history. Early attempts at correcting urinary leakage included rudimentary belts that supported cloth underwear, external bags made of pig bladder tissue (!), and milkweed leaves as undergarments. Even well into the 1900s, technology had not progressed past the use of folded linen cloths, tucked into undergarments and washed with clothes. Today, we know that as many as 1 in 2 women will experience some form of urinary leaking in their lifetime, particularly at age 45 and older – and half of those women experience SUI.2 Incontinence is not only a normal condition, it’s incredibly common.

Early menstrual hygiene solutions came from the Ancient Greeks, who created the world’s first tampons out of bits of wood and lint, and the Ancient Egyptians, who fashioned the world’s first absorbent pads out of softened papyrus. Despite these early versions of pads and tampons, thousands of years passed before significant innovations were made in menstrual hygiene. As the rest of the world modernized itself, stigmas and taboos concerning women’s health stayed stuck in the Dark Ages. At the turn of the 19th century, as new light was shed on the importance of cleanliness, crude cloth pads and aprons were finally produced and marketed publicly. Though an important step forward, the treatments for SUI even as little as 100 years ago seem primeval and almost satirical in hindsight. 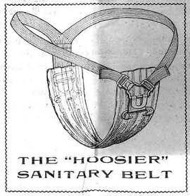 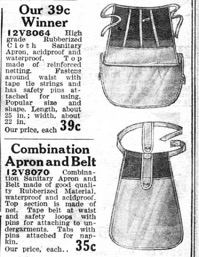 Contraptions like these were very commonly used in the early 1900s for periods and incontinence. Made of cloth and leather straps, they had to be washed frequently to avoid odour.

As time went on, companies like Kotex and Johnson-Johnson realized the need for absorbent, disposable pads, in lieu of bulky undergarments resembling an odd form of medieval punishment. Women were now able to use and dispose of pads more frequently without needing to wash them. The development of disposable, discreet pads provided much-needed relief from bulky, unhygienic cloth belts and aprons. For the first time, ads in papers and catalogues could be found for women’s health products. The stigmatic, taboo nature of women’s hygiene was slowly beginning to normalize.

But even the rapid development and marketing of disposable pads didn’t provide a feasible solution to urinary incontinence. Pads absorb leaks, but they don’t stop them from happening. They’re fairly high-maintenance, and active women can’t always find time to change them as frequently as they’d like, leaving them damp, uncomfortable, and with odour. As with most disposable goods, pads end up in landfills, so they’re not environmentally-friendly either. With a cumulative cost of US$1000+ per year, there is clearly a need for a more cost-effective, modern, innovative solution for SUI.

As we moved into the latter half of the 20th century, the advent of the pessary – a kind of device that is inserted into the vagina to support the urethra and bladder wall – provided a new alternative to SUI management. Rather than having to change and dispose of pads several times per day, pessaries helped to prevent leaks before they happened. Surgeries to correct incontinence were becoming more common, but were reserved for more extreme cases. Traditional pessaries took on a ring-like shape, while later developments assumed a host of different styles. 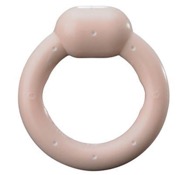 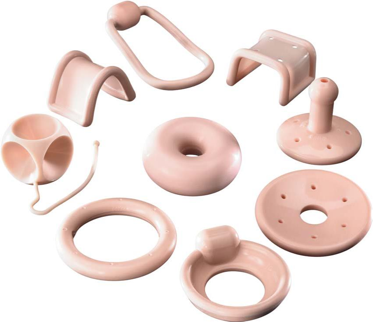 Traditional pessaries are required to be inserted, cleaned, and removed by a physician. As a result, women must visit their physician up to 4 times per year. Pessaries can also often get dislodged from original placement, requiring further physician visits.

Traditional pessaries are not free from shortcomings. Though they showed merit in treating SUI, they had to be fitted by healthcare professionals, which can be an invasive and uncomfortable experience that prevents many from undertaking it. Many pessaries are meant to be replaced every 1-3 months, requiring recurring visits to clinics for fittings and check-ups. Considering the cost of not only purchasing new devices, but repeated clinic visits, pessaries can be just as expensive as pads on a yearly basis.

Today, women seeking relief from urinary incontinence face a host of treatment options. One end of the spectrum offers non-invasive, passive treatment, in the form of pads and diapers. The other end sees surgical procedures, both expensive and invasive. A more middle-of-the-pack alternative was born with the invention of the traditional SUI pessary, but are inconvenient as they require frequent physician visits. Seeing this, urogynecologist Dr. Scott Farrell set out in the early 2000s to improve pessary technology, with a focus on self-management. Dr. Farrell recognized the importance of offering effective SUI solutions that were both effective and accessible. Uresta, a self-managed, reusable, and innovative device designed to stop leaks before they happen, was created. 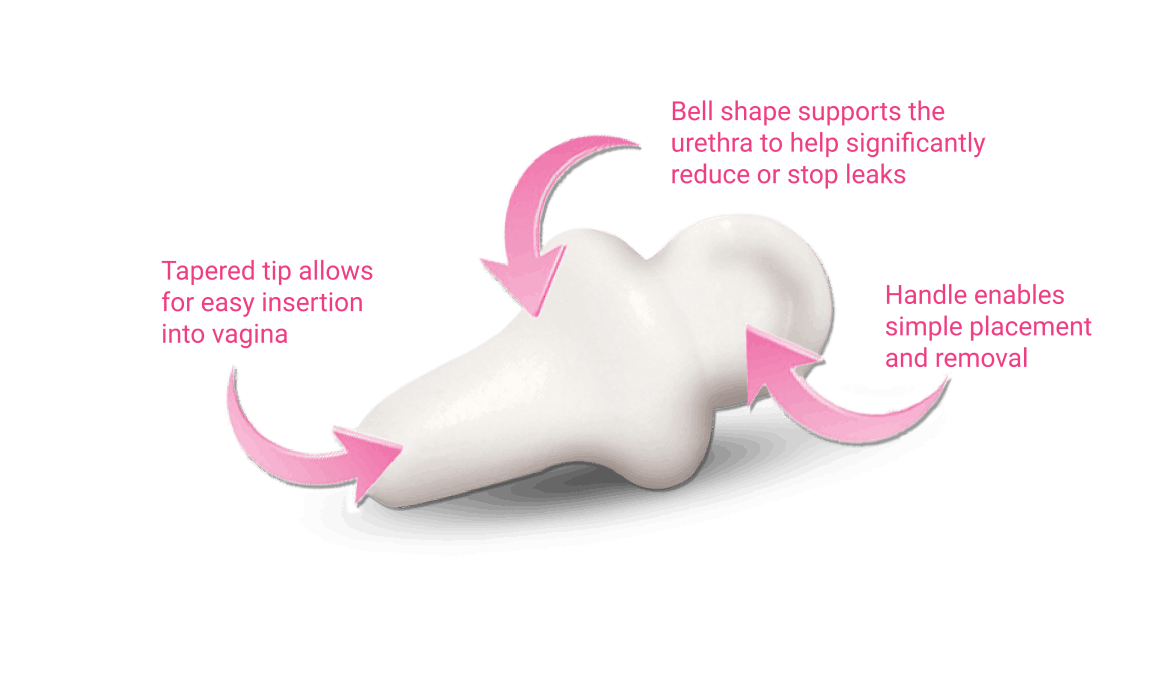 Uresta allows women to have full control over their ability to manage stress urinary incontinence. A range of sizes allows women to find the one that best suits them, without needing to be fitted by a physician. The handle allows for simple insertion and removal by the woman.

Previously, the breadth of self-managed treatments was mostly limited to pads, Uresta fits like a tampon and lasts for up to a year. Uresta stops or significantly reduces bladder leaks associated with SUI verses absorbing them like pads. Uresta is one of the most exciting new products in women’s health; not only for its effectiveness in preventing physical symptoms, but for its power in improving quality of life. Ongoing SUI is not only an issue of discomfort and inconvenience, but of overall well-being. Left untreated, SUI can lead to anxiety and depression3-5. Allowing women to take control of their own treatment, devices like Uresta break down the barriers facing those who seek to regain their confidence and overcome SUI on their own.

As mentioned, advances in solutions for menstrual hygiene have often trigged advancement in solutions for managing stress urinary incontinence. We’ve seen a shift in the last decade towards from pads to tampons and to menstrual cups (e.g. DivaCup, FLEX, Nixit, Lena, Saalt, etc.) . Younger women are adopting menstrual cups at a much faster rate than their older counterparts. As these younger demographics progress in age, have children, and develop SUI are, understandably, shocked at the prospect of reverting to using pads as “treatment”. Absorbent pads seem rather arcane, especially compared to the innovation we’ve seen in the adjacent market for menstrual products. The need for a better solution for SUI has never been more apparent.

Women today are more empowered to speak up about their health concerns. The normalization of discussions concerning women’s health have allowed people who struggle with SUI to seek better alternatives and ditch the status quo. Traditional solutions for SUI fall short, plain and simple. The switch to better alternatives for managing SUI is long overdue. In the same way that we look back on arcane treatments for SUI with disdain, we must recognize that many products on the market today are simply newer versions of technology that are thousands of years old. Every woman deserves to live life, leak-free, and we truly believe Uresta is the revolutionary solution the stress urinary incontinence market desperately deserves.

Want to join the discussion?
Feel free to contribute!

Are you a healthcare professional?

Survey shows the negative mental impacts of suffering from bladder leakage may...

What IS the pelvic floor and what does it DO in my body?
Scroll to top